A friend of mine who recently moved to London UK - and who just moved to a new house, posted me this photo from her garden asking me to identify the plant.. I see it's the seedpod of some bulbous plant ? But I don't know what it is...

Can any of you help telling what plant this is ?

Got coneflowers like crazy, and one of the very first ones I planted are starting to get either signs of mites or aster yellows. I hope it's not the latter because I'd have to uproot the whole thing and burn it. I'm checking them every day for signs of the petals turning green. We had ten days of cool, wet weather. What do you think? 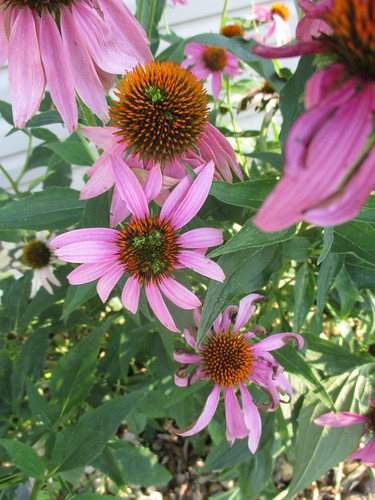 Also sharing some photos of my mostly native pollenator garden.

A further away view of the affected plants. 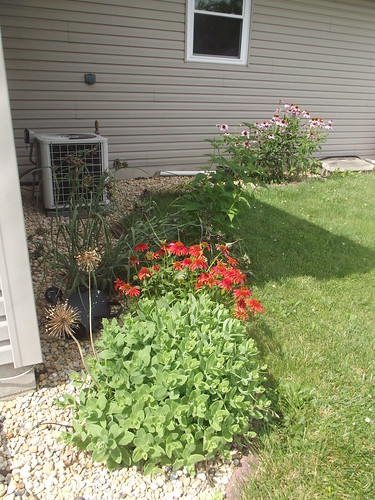 I've eaten Arkansas Black Apples and they are delicious!
And so are Brushy Mountain Limbertwig apples.
I found this article on the internet this morning and thought that everyone should know about it.

Here's a few of my own thoughts about this event:
This is a natural response which was caused by the global change/warming we're currently experiencing. These plants were triggered to produce this super flowering event when they experienced harsher than usual conditions last summer.

The reason for it?  It's a long range survival mechanism particularly on the part of the giant Saguaro cactus.
The plants are trying to produce huge amounts of seed with a huge amount of genetic diversity this spring.
I'd be willing to bet you a doughnut that if the seeds produced this year were sampled and tested against the seeds from years past, that it would be discovered that the seeds from past years would have a lot less genetic variation than the seeds produced this year.
In effect:
I strongly suspect these long-lived Saguaros are mostly just cloning themselves during these non-stress years.

Here's a wicked thought:
I wonder what would happen if English Ivy were put through a similar event? Might we at last see English Ivy produce flowers?
And what about other plants that are well-known for their unwillingness to produce flowers?
Any update on the solutions provided for wilting allysums? I have mine in a planter that's well watered and recieves about 6-7 hours of sun a day. The foliage is coming along nicely, however my plant blooms wilted petals everytime. Any tips to get the fullbloom look going? I'm new to gardening so any help would be greatly appreciated.

I searched the tags for this community and did not find one for strawbale gardening.

Are there any members who do this? I'm trying it for my first year, as my zone 8A garden in central Arkansas has rocky clay soil that just suffocates plant roots. In the past 25 years, I've spent thousands of dollars trying to amend the soil, with wildly variable success.

I have a very small plot for my garden and will use the strawbales this year primarily for growing vegetables.

If you have experience with strawbale gardening, I'd really like to hear about it.

I;m not sure if anyone is still here but if anyone can tell me what this volunteer green is I'd be very grateful. 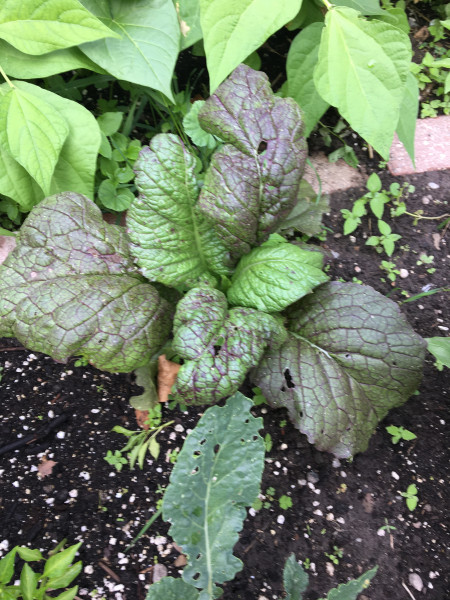 If you're going to be purchasing any garden seeds within the next five days (until 10 September) either for fall planting (in the northern hemisphere) or for next season, please consider making your purchase through Baker Creek Heirloom Seeds.  The proceeds of all seed sales will be going to hurricane Dorian relief efforts.
Free standard shipping to the U.S., Canada, and Mexico.  See site for other international shipping information.

Obligatory disclaimer: I have no official connection with this company.  I'm just one of many happy customers.

Thank you for your attention.

i've been growing the same green beans for maybe 8-10 years now. i've been saving the seeds and planting them again. they're pole beans, kentucky wonder or kentucky blue. a common variety, nothing special. they grow well for me and produce tasty green beans.

is it normal for pole beans to produce like crazy, come to the end of all the beans, every single last one... then wait two weeks before finally putting out new blossoms for new beans?

i dont remember them doing this when i first started growing them. admittedly when i first started growing them the japanese beetles werent so bad here as they've gotten in the last few years. but after a particularly bizarre (minnesota) winter, with unusually and completely bare ground in january's intense below zero freeze, the japanese beetles arent very bad this year at all. at first i thought it was the fault of the #@%$*&# beetles. that they'd destroyed too many leaves, and the plants had to make new leaves before it could make new blossoms. because they did. but this year, the leaves are barely damaged. and no new leaves have grown before the second round of blossoms came. yet we still had the two week gap before the end of all beans and the start of new blossoms.

our growing season is short up here, and i hate to lose time like that. any suggestions?


here is a picture of the two rows of beans, each row about 12 feet long. and wanting to be even taller than my trellises 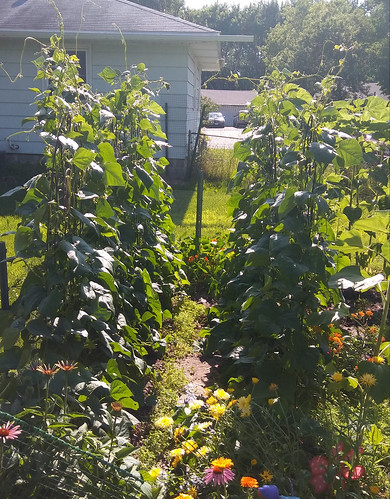 Just thought I'd share this, which arrived in my Inbox this morning.

I've long been a happy customer of several seed houses, purchasing on-line.
One of those is Baker Creek Heirloom Seeds, who sends their mailing list updates, promotions, and things such as this video, about succession planting and what you can still plant in July (in the northern hemisphere):

As the presenter in this video says, they're talking mainly about USDA hardiness zones 5 through 7, but with some calendar adjustments for the warmer zones, and perhaps some season extension in the cooler ones, you may be able to use at least a couple of these suggestions.